FENELON FALLS, ON: Today, Rogers Communications and Cable Cable announced a joint agreement that would see Rogers acquire Cable Cable, a family-owned and locally operated company based out of Fenelon Falls Ontario.

“Cable Cable has been a cornerstone of our local communities since its’ inception in 1983,” said Michael Fiorini, CEO of Cable Cable. “From a small cable startup serving a single community to a multi-service telecom serving thousands; it has been quite the journey. I attribute our many years of growth and success to the committed local staff who have worked tirelessly to ensure we offer the best experiences possible for our customers. The decision to pass on this legacy was a challenging one, but I know that with Rogers at the helm even greater things will be possible.”

Cable Cable currently provides Internet, television, and home phone services to over 6,000 residents and businesses across the City of Kawartha Lakes Region. The company will continue to lead the business until it becomes a wholly owned subsidiary of Rogers Communications. During this time, there will be no changes for customers, and they will continue to experience the same great products and service as they do today. Rogers is committed to continuing Cable Cable’s strong local presence and all employees will be invited to remain with the company.

“We are thrilled to have the Cable Cable team and customers join the Rogers family and carry on the incredible legacy that Michael and his father Tony have built over the past 38 years,” said Ron McKenzie, Senior Vice President, Technical Operations at Rogers. “We look forward to working with the hometown team and building on the great service they deliver, while investing in the community to connect even more Kawartha Lakes families and businesses to the latest products and services.”

Fiorini shares the belief that Rogers’ presence in the Kawartha Lakes Region will help address the lack of broadband access facing many rural areas in Ontario, saying “I look forward to watching Rogers build on our existing footprint to bring their best-in-class products and services to more communities throughout the Kawarthas.”

Piercy Consulting Inc. served as financial advisor to Cable Cable on this transaction.

FENELON FALLS, ON: As health officials and businesses across Canada continue to make challenging decisions in the face of the ongoing COVID-19 pandemic, Cable Cable is committed to helping their local communities remain connected and safe. Operating out of Fenelon Falls Ontario, the telecommunications provider offers internet, television, and home phone services to thousands of customers across the City of Kawartha Lakes.

“There has never been a more important time for our local community to remain connected and informed”, says Michael Fiorini, CEO of Cable Cable. “I want to assure our customers that we are open for business and committed to helping them stay connected, entertained, and safe throughout the COVID-19 pandemic. Our staff members live in the communities we service and recognize our role in supporting neighbours and families as we all navigate this challenging time.”

The company says it is closely monitoring the situation as it evolves and adapting as required to take all safety precautions while continuing to support and protect its customers and staff.

Enhanced protection for staff and customers

Customers looking for more information and ongoing updates regarding Cable Cable’s precautions throughout the COVID-19 pandemic can visit www.cablecable.net.

FENELON FALLS, ON: Cable Cable, a local telecommunications company, the Lindsay Agricultural Society, and the Boys and Girls Clubs of the Kawartha Lakes (BGCKL) have joined forces to send local families to the 164th annual Lindsay Exhibition (LEX).

Hosted by the Lindsay Agricultural Society, the LEX is the fourth-largest agricultural fair in Ontario and attracts thousands of people each year.

“For many families, attending the LEX is a nostalgic outing which signifies the transition into fall, and serves as an important way to stay connected to their community,” says Harry Stoddart, General Manager of the Lindsay Agricultural Society. “We’re happy to work with Cable Cable and the BGCKL to help facilitate this experience for local families.”

Through an exchange of services partnership, the Lindsay Agricultural Society and Cable Cable have arranged to donate ten single day family passes to the BGCKL. The Club plans to divide the passes between local families who utilize their services, their 2018 Summer Camp attendees, and the Youth Leaders who help run their programs.

“We’re proud to call the Kawarthas home, and we feel it’s important to give back to the community in any way we can,” says Michael Fiorini, CEO of Cable Cable. “Being family owned and operated, we have always maintained a ‘family-first’ philosophy and we recognize how exciting it is for families to attend a big local event like the LEX.”

Cable Cable has a long-standing relationship with the Boys and Girls Club, which includes support of the Club’s athletics and Leaders in Training programs and promotion of their services and initiatives through Cable Cable’s Community Connections media sponsorship program.

The 2018 LEX will be held from September 19th to 23rd and in addition to the typical fall fair fun, this year’s ‘LEX party!’ features big-name country acts Cold Creek County and Jason Blaine.

Cable Cable CEO Michael Fiorini believes in treating his customers like family, which explains why his Fenelon Falls company was one of the early adopters of Remote PHY in the Kawarthas.

Fiorini’s philosophy is family first, which meant Cable Cable was willing to take a leadership role with Remote PHY, a new technology simply because it would benefit his customers.

“In delivering the best experience possible for our customers it is necessary to maintain relevant and future-proofed networks,” said Fiorini. “Deploying Remote PHY and an IP Video over DOCSIS platform will allow Cable Cable to do just that.”

FENELON FALLS, ON: Cable Cable has donated $2000 to support programming at the Boys and Girls Clubs of the Kawartha Lakes after winning two national awards earlier this year.

Tuned-in Canada: The CCSA Awards, is a national competition which is hosted annually by the Canadian Communications Systems Alliance (CCSA) and highlights outstanding achievement by independent, local providers of internet, television, and telephone services across Canada. Cable Cable received recognition through two categories of the competition in 2018: Best photo: what does connecting Canada mean to your company? And Best people: celebrating your office hero. For each winning category, the company received $1000 to donate back into their community via a local charity of their choice.

“For us, the obvious recipient for our prize money was the Boys and Girls Club”, says Michael Fiorini, CEO of Cable Cable. “The Club offers so many critical services in our community and has a significant impact on quality of life for families, and especially children, in the Kawarthas. As always, we are happy to support their programs in any way that we can.”

Cable Cable has a long-standing relationship with the Boys and Girls Club, including promotion of their many programs and services, as well as support of the Club’s athletics and Leaders in Training programs.

“Michael Fiorini and the team at Cable Cable are champions of the Kawartha Lakes community and beyond,” says Scott Robertson, Executive Director of Boys and Girls Clubs of the Kawartha Lakes. “This donation will impact many families struggling financially by providing subsidized sports programs for their children. Cable Cable has been a long-time supporter of the services our Club provides to over 8,000 children and youth each year. We are very grateful for their commitment to local families.”

Cable Cable and fellow 2018 Tuned-in Canada Awards recipients will be celebrated during a special ceremony at the CCSA’s annual ‘Connect’ conference which is being held this September in St. Andrew’s by the Sea, New Brunswick. 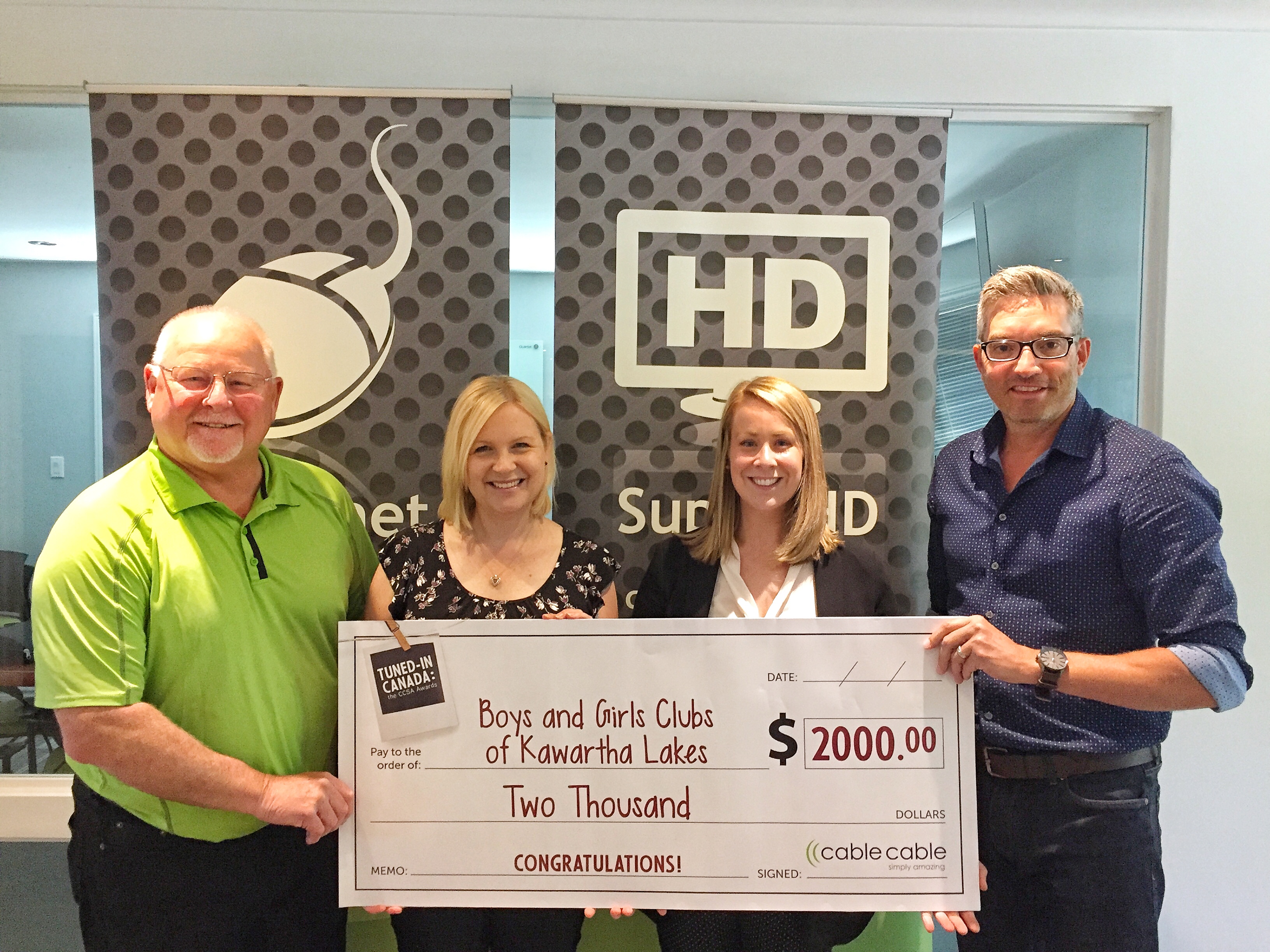 Stay connected on the go this summer! Want to browse Pinterest at the beach, for sandcastle building inspiration? Search the closest place to snag a quick snack while you wait at the locks? Catch up on your Facebook messages, from the ice cream lineup at Kawartha Dairy? Save your mobile data, Cable Cable has you covered!

QUISPAMSIS, NB: Nationwide voting is underway for ‘Tuned-in Canada: the CCSA Awards’ and Cable Cable, whose administrative office is located in Fenelon Falls, has been shortlisted for two awards.

‘Tuned-in Canada: The CCSA Awards’ is a project sponsored by the Canadian Communication Systems Alliance (CCSA) and is designed to spotlight the great work performed by CCSA members – local, independent providers of internet, television and telephone services in communities across Canada.

Cable Cable is up against three other nominees in the categories of Best photo: what does connecting Canada mean to your company? and Best people: celebrating your office hero. If they are the winner, the $1000 per category prize will be donated to the Boys and Girls Clubs of the Kawartha Lakes.

“The CCSA has been running the awards since 2014, and has provided more than $30,000 to winning companies, who in turn have donated their winnings back to the communities where they live and work,” said Jay Thomson, CEO of CCSA. “We hope the citizens of the Kawartha Lakes will embrace the community spirit at the heart of this friendly competition and bring out the vote to support their local nominee, Cable Cable.”

Nationwide online voting is open at Tuned-in Canada 2018. Voting takes place using Facebook authentication and voters can cast one vote per day until May 11th at midnight (Atlantic Daylight Time). Offline voting forms are also available for individuals who do not use Facebook, and those who are interested in this option should contact Jayme Hughes jhughes@cablecable.net.

The winners will be announced on May 23rd.

The Canadian Communication Systems Alliance (CCSA) represents more than 110 Independent companies providing internet, TV & telephone services across Canada. Those companies serve hundreds of thousands of customers in communities generally outside urban markets, from coast to coast to coast. They include community cooperatives, family businesses, municipalities and companies owned by Indigenous Peoples. They connect hundreds of thousands of Canadians who otherwise might not have access to these critical communications services.

Mayor Andy Letham says, “I’m thrilled that Cable Cable has made this possible. Having WiFi available at the locks is a feature that boaters will appreciate. It’s an added bonus to the beauty and amenities they will find as they enjoy Kawartha Lakes this summer.”

FENELON FALLS, ON: Cable Cable is pleased to announce the appointment of Jayme Hughes to the position of Communications Manager.

A Bobcaygeon resident, Hughes brings over a decade of experience to the role, with expertise in strategic communications, brand management, community building, and digital marketing. Hughes has spent the bulk of her career working within Ontario’s network of 36 Conservation Authorities including Conservation Ontario and more recently, Kawartha Conservation in Lindsay. Through these roles, Hughes developed a passion for collaboration, and gained governance experience as a participant on various committees and panels.

“Like most residents, I’m proud to call the City of Kawartha Lakes home, and I’m passionate about supporting local business because it’s vital to our region’s economy,” says Hughes. “It’s very rewarding to join a company with longstanding local roots and a reputation for exceptional commitment to their customers and community.”

With several plans for infrastructure improvements and updated service delivery underway, including fiber to the home for Oakwood and several other rural Hamlets within the City of Kawartha Lakes, improvements for effective communication and outreach continues to be a key focus for the company.

“We are fortunate to have Jayme join us and lead our communications efforts.” says Cable Cable’s CEO Michael Fiorini. “Her experience, polish, and great personality will be a terrific addition to the Cable Cable family. I look forward to working with Jayme and watching her take us to new heights.”

Hughes hopes to prioritize an improved online presence for the company, develop new tools for customer engagement, and build promotional collaborations with other local businesses.